Wow, I can’t believe week 2 is over already, it’s going so fast (which is a really great thing!)… the faster it goes, the faster we can get out of Santana and get back to some normality!!

I am not going to sugar coat it, the first few weeks in the caravan have been tough. I have had a few ‘moments’ shall we say, but it has also been an adventure and a huge learning curve.

I am one of those people who have sat there so many times watching Grand Designs thinking ‘these people who live in caravans while they renovate their homes are completely crazy and totally nuts’.

Never in a million years did I think that would be me. Never.

That said, I am actually very glad that we are doing this. I think it’s quite character building and I know I am going to appreciate the house so much more when we move back in.

That’s what I keep telling myself anyway!! 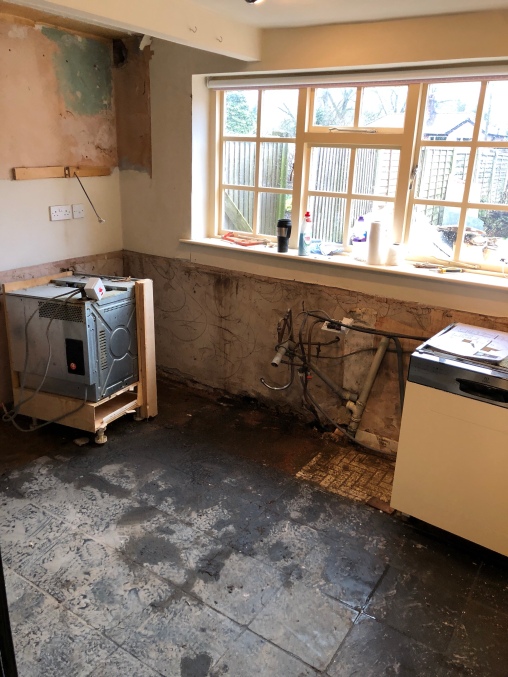 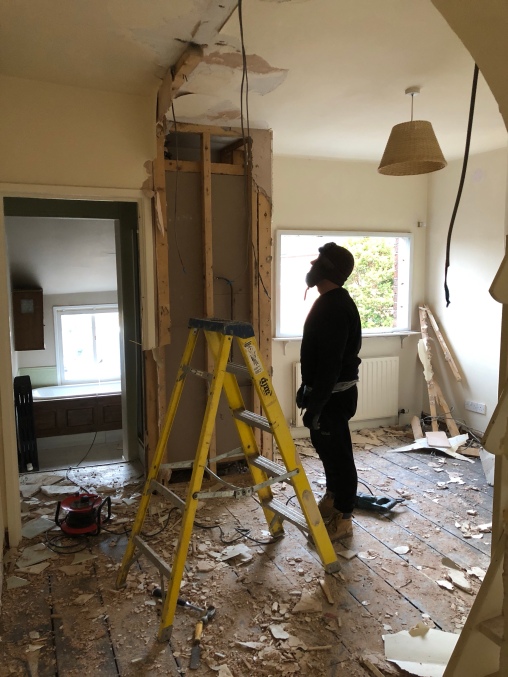 But I am pleased to say that we have not only have we survived the caravan (apart from the one night that we aborted and ran to my mums at 3.30am because the wind was so bad) but we have also managed to keep on track with the build!! 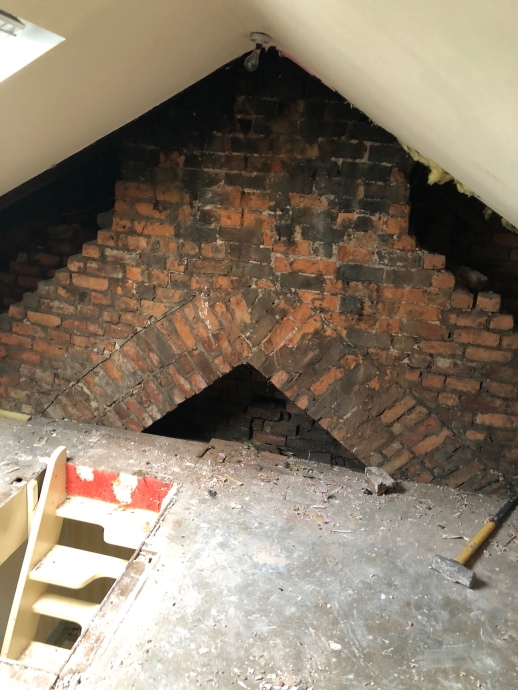 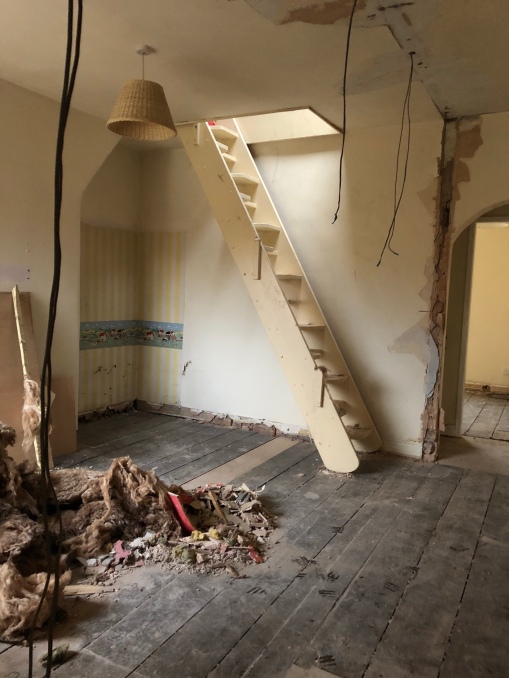 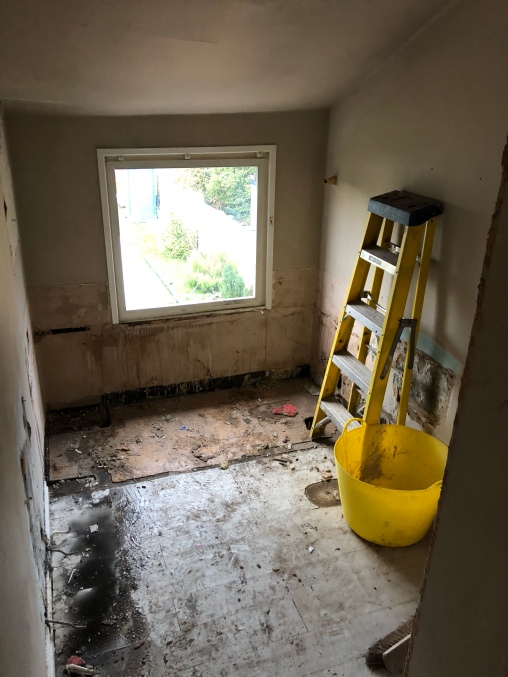 A lot has happened at the house in the first few weeks and there have been some major changes. It looks completely different already.

We have stripped the house out completely, so pretty much everything that is being removed, replaced or changed has now gone.

That includes ceilings, plaster, electrics, plumbing, one of the chimneys, some of the walls… you name it and it has probably gone! 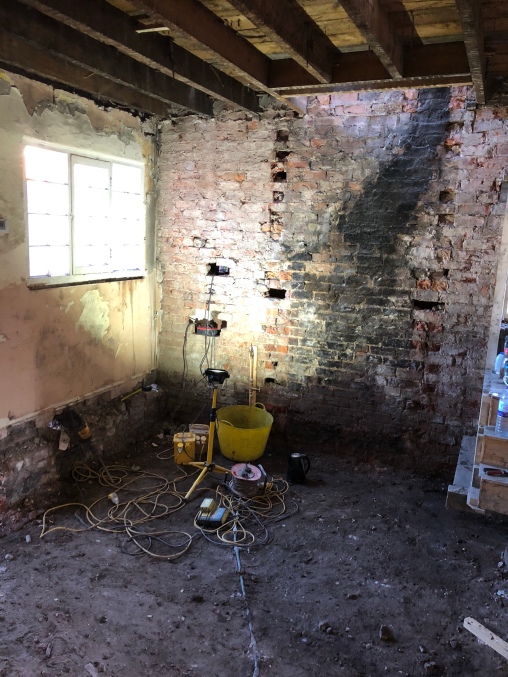 We have also very excitingly started on the ground floor extension. The diggers came on Wednesday of week 2 and dug out the foundations.

It feels like we have been talking about ‘the extension’ for ever… so it really is amazing to finally see it happening and to be able to see the the space for real.

No longer is it a figment of our imagination. We can actually see it and it is so so cool!!

We have also had to do some drainage work because the existing drains were sat exactly where the extension needed to go.

Luckily, as we are still having a passage way down the side of the extension which will lead to the backdoor, we have been able to just shift the drains to the side slightly to sit in the passage!!

Being able to do that has made life a lot easier as finding homes for drains  and man holes can be an absolute nightmare!! 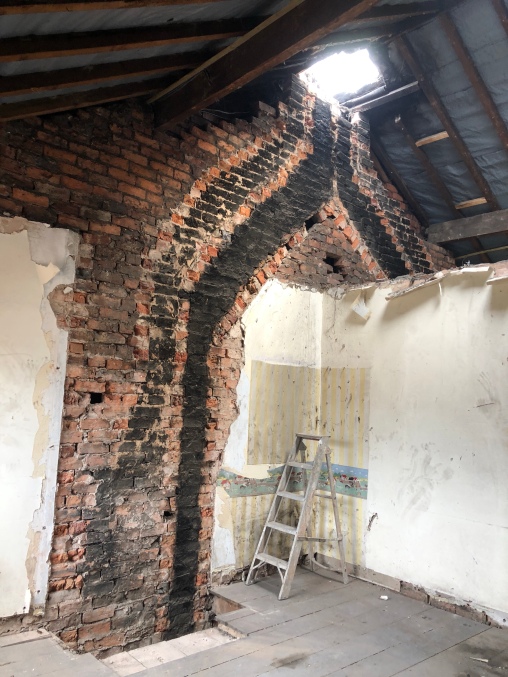 So far, thankfully, we haven’t had any major set backs or uncovered anything disastrous.

The strip out and the digging of the foundations are always the most nervy bit, because until you start exposing things you are never quite sure what you are going to find.

About the worst thing that we have found so far, has been some pretty dodgy brick work behind the plaster.

Although I suppose when you are working on a house that was built in 1864, that is to be expected. It is also nothing that can’t be fixed, it is just going to involve re-doing some of the brick work internally to strengthen the walls.

Although I have done a few house renovations now, I have actually never renovated a house quite as old as this one before.

So, it has been really interesting to see some of the techniques that they used to use when building houses… we even found straw in the roof that was being used as insulation!! How times have changed…!!

We are also going to be starting to put the floors back in in the attic and taking the roof off, to make a start on our new roof!!

I know I talked you through the plans on the vlog and I don’t want to bore you but I thought I would also just pop a copy of the existing layout and the new layout that we are creating on here too.

They kind of speak for themselves, in terms of what we are doing but essentially we are extending out on the first floor and second floor and also doing an attic conversion. 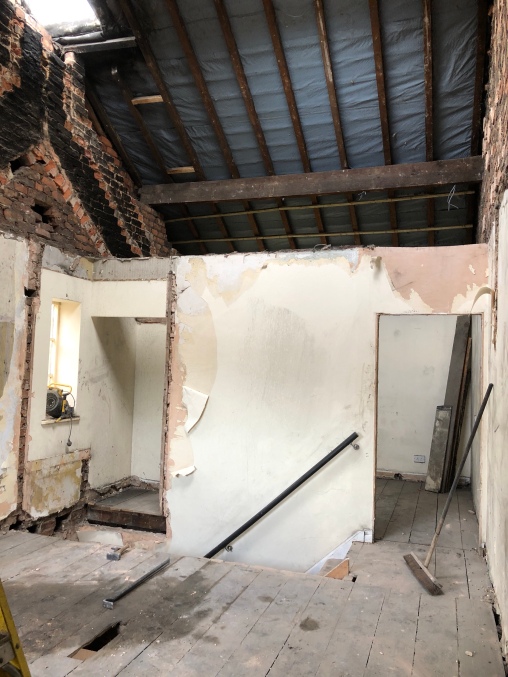 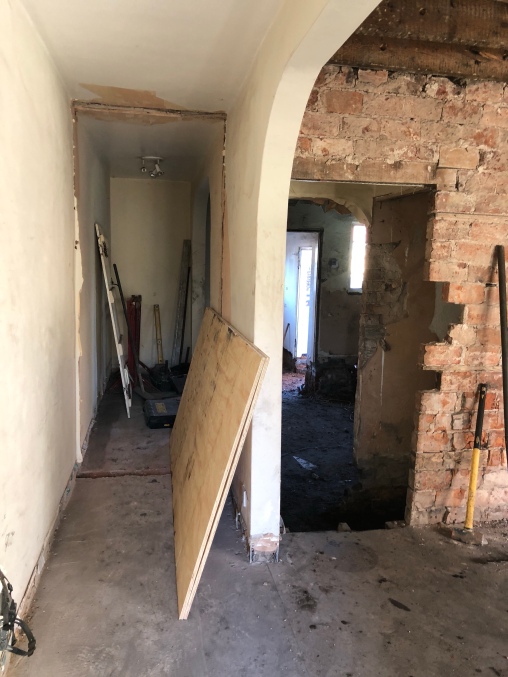 In terms of project time and cost… We are estimating the build will take 5-6 months (keep your fingers crossed) and cost circa £100,000 (give or take a few… probably give)!!

I will maybe breakdown the schedule and costs for you next time… that is if anyone would be interested in that, let me know if you would 🙂 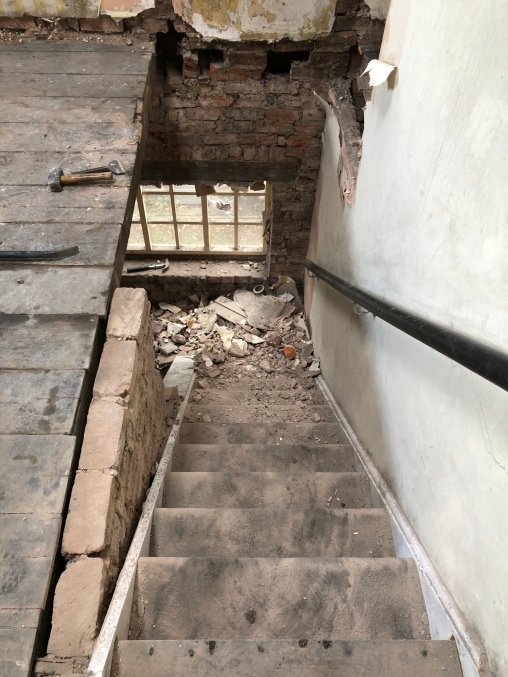 Anyway, that’s about all from me for today!

I will report back again in 2 weeks when we will hopefully have some brick work up for the extension. Eeek!!

I will also keep going with the vlog, which so far has been scary but amazing at the same time.

On the note of the vlog, I just wanted to say another massive thank you for all of the lovely messages that I have had… I was pretty apprehensive about it, so all of your support just means so much!!

So as always, thank you.